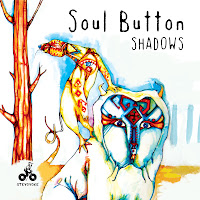 Something of a mystery release this one, because Soul Button is, according to the label, "a talented old producer who's really well-known in the house music business but doesn't want to show his identity. He wants to focus on the music rather than his old image." And no, I don't know who it is… for all I know this very credible and now-sounding slab of soulfully-infused tech-house could be the work of, I dunno, Adamski or Guru Josh or someone. Or David Guetta. Brrrr.

Actually, let's not worry too much about that and concentrate on what it sounds like. There are four tracks on offer – Shadows itself, Shine and Talking, which features fellow Steyoyoke artist Bartok and comes in a choice of vocal or dub mixes. And yeah, 'soulfully-infused tech-house' pretty much sums it up but if you want a touch more detail, Shine features a vocal from La Phoenix that reminds me a little of Billie Ray Martin, Shadows rides a slightly funkier groove and has heavily-distorted male vox, while Talking is dramatic, cinematic and sweeping, and veers a little closer to prog territory.

Skinny-jeaned young hipsters are gonna love this one. I don't mind it myself either, particularly Talking… let's just hope it doesn't turn out to be by anyone too embarrassing, eh?

About: This is only the third release from new Berlin-based label Steyoyoke… click for their website or here's their Soundcloud and Facebook pages. Oh yeah, and I nearly forgot… here's a free downloadable mix from Soul Button as well.