Carsten Rausch - Somewhere In Between 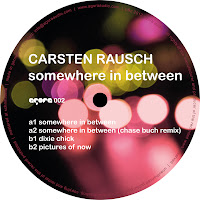 Only the second single from Berlin-based Agora Audio… the first being Lula Circus's Irreversible which we looked at back in January. This second comes from a German DJ who's apparently been around since the early 90s, though only releasing tracks since 2007.

Somewhere In Between itself is a groovy, midtempo but still driving affair with "come on!" shouts, understated pianos and a nice phat bottom end. It's accompanied by a slightly tuffened-up Chase Buch Remix with an even phatter bottom end, plus Pictures Of Now, a stripped-down tech-house cut for locked-on underground floors and, bringing a nice bit of variety to the EP, Dixie Chick, a carnival-esque tech-house/electro-swing number.
Two releases in and two winners so far… lookin' good, German peeps!

About: Just as before, you can find Agora Audio on Facebook, on Soundcloud and at their own website
Posted by Russell at 18:28