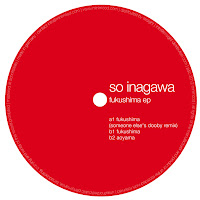 Going a (fair) bit deeper now with this offering from Japan's So Inagawa, coming on Lausanne/Berlin-based Minimood.
Fukushima itself is a relatively upbeat deep houser with lots of jangly top-end (vibes, maybe? xylophone? something toppy and percussive, anyway), luxuriant pads n' chords and just a hint of garage-y swing. Nice! Sean 'Tuning Spork' O'Neal, AKA Someone Else, then turns the track on its head completely: his Dooby Remix is a ten-minute deep, dubby techno epic. The hype sheet calls it "a hypnotic masterpiece" and I wouldn't argue.
But good as those both certainly are, the standout of a fine bunch for me is the bonus cut Ayoama, a seriously deep affair with a cocky, struttin' b-line, crisp percussion, the warmest of chords, FX flying in and out and breathy female moans. This is hot n' sultry stuff, have no doubt!

About: Minimood seem to be building themselves a pretty decent rep to say this is only #9 from them. Here's their website and Facebook if you wanna investigate further.
Posted by Russell at 22:18