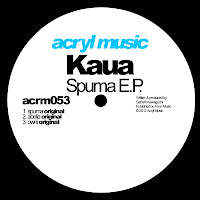 The title track Spuma itself is the most obviously dancefloor-oriented of the three tracks on offer, a deep n' moody groover topped off with dreamy, floaty, proggy twiddles. Next up, Abelia is a late-night, sofa-surfin' kinda thang with ambience galore, periodic injections of fat squelchy bass, mournful brass and glitchy broken/two-step beats.

But while those are both very cool, the killer to these ears is Owni, which is as fine a slice of heavy dub-inspired deep house/deep techno bizniss as you'll hear all week. In fact it's probably closer to straight-up dub than anything… but that's by no means a problem, obviously. Crucial vibes, seen?

Out: For a couple of weeks on Beatport, but getting a full worldwide release this week.

About: Find Acryl Music at their website, on MySpace and on Soundcloud.
Posted by Russell at 20:16