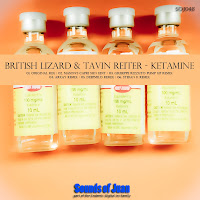 I'm not really entirely sure what they're trying to say with this track… it's got a sampled vocal featuring some chemist/biologist type talking about what ketamine does to your brain, and it's hard to tell whether it's meant to be warning you off the stuff, or celebrating its use. If it's the latter then I'm not sure it's something that should be encouraged*, but, y'know, it's only a record. And a rather good one at that.
It's also about as close to an out-and-out techno release as you're likely to find reviewed here on TIWWD very often, albeit I'd still say it falls into the tech-house arena, just about. But between the twitchy, space-y minimalism of the Arkay Remix, the bubblin' acid of the Deepmilo Remix and the housier, organ-flecked vibes of the Giuseppe Rizzuto Pump Up Remix – not to mention perfectly playable Original, Stefan K and Mason (!) passes – there's plenty for DJs and dancefloors of many persuasions to enjoy here.
Out: This week
About: This comes on Sounds Of Juan, which is of course the techno arm of the mighty Endemic Digital stable.
*Personally I'll pass on knocking myself out with horse tranquillisers thanks, I need what few brain cells the rave years have left me with :-)
Posted by Russell at 21:51