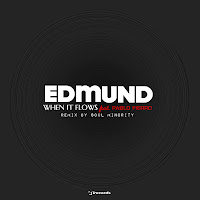 We're a tiny bit late on this one… it actually came out about a week ago but I only got it yesterday, and it's been ages since we had anything through from my boy Diego, AKA Edmund, so it's going in!

If you like your deep house on the soulful side, then the slow-groovin' original of When It Flows won't disappoint, what with its insistent throbbing b-line, wood block percussion and atmospherics a-gogo. If you want it a little more floor-oriented, though, then head for the remix from fellow Spaniard Soul Minority , which couldn't be much more different as he adds a jackin' Chicago backbeat, squelchy acid b-line and a familiar “runnin'” vocal sample.

Despite there being just the two mixes, then, this is a package that will suit a range of DJs and times/moods. Top stuff… but then coming from Edmund, and on i! Records, what else did you expect?

About: i! Records can be found online here and on Facebook.
Posted by Russell at 22:28