Dub Modo – Key From All Doors 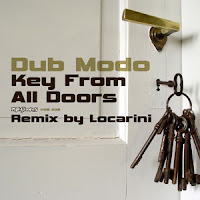 In its Original form, Key From All Doors is a spacey, dubby deep house-meets-deep techno groover made for warm-up, afterhours or post-club play. It's top-drawer stuff, but be warned: it's one for those that like it sparse and head-y, and those in search of lingalonga peaktime thrills will need to look elsewhere! A Locarini Remix then takes us into more uptempo and percussive tech-house territory.

The finished EP will also apparently contain a couple more tracks called New Step and Travel Comet, but they've not promo'd those so I can't tell you what they sound like! On the basis of the title track alone, though, this is one you need to check.

Out: This week on Beatport, everywhere else from May 20

About: Nite Grooves is, as you know, part of the mighty King Street stable.
Posted by Russell at 12:38