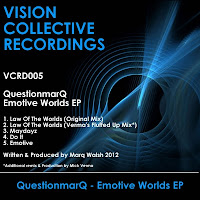 A five-tracker here from Cork's Vision Collective and fellow Cork resident QuestionmarQ, AKA Marq Walsh, who for many years was resident at the city's famous Sir Henry's nightclub.

Do It gets proceedings off to a fine start, fusing old-skool Chicago and Detroit influences in the sound palette, adding a little disco sheen and topping it all off with "let's do it!" vocal exhortations. Emotive is more yer typical moody late-night deep house groove, but still very cool, before Law Of The Worlds ramps up the funk factor. This latter somehow manages to be decidedly funky yet kind of blissed-out and dreamy at the same time, while Verma's Fluffed Up Mix of it leans more heavily towards the latter part of the equation, using considerably more of the new age-y spoken vox for a start.
I'll be quite honest, the more straight-up techno of Maydayz doesn't do it for me so much, but that's just me… its inclusion nevertheless serves to underline the fact that this is a very strong EP that sees Mr Walsh flexing his production muscles across an impressive range of styles.
Out: This week
About: Here's the usual links, then… website Facebook Soundcloud
Posted by Russell at 21:46