Shades Of Gray - All About The Drums EP 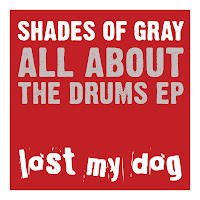 A strong four-tracker here from Shades Of Gray and the ever on-point Lost My Dog.
The 'title' track, The Drums Go Like This, features an anonymous producer discussing how he writes songs, while old skool Chicago-esque house sounds potter away beneath a layer of crowd/party noise. Do This, featuring Rodney O, brings the tech-y, proggy chug and tops it off with another spoken vocal, with Rodders (I presume it is) urging his partner to "do this" and let him take her "on a ride to his twilight zone". Barry White would be proud! Father's Guitar, featuring Pavel ORM, is then another upbeat affair with, unsurprisingly, a little added Spanish six-string action.
But while all three of those are pretty cool – The Drums Go Like This especially – the standout by far for me is Sometimes (credited to Shades Of Gray & Antsmif). Here, Messrs Ruzicka and West take the brave step of reusing the Bessie Jones blues/gospel sample made famous by Moby on Honey, placing it over a pulsing, chunky deep houser with some nicely understated wukka-wukking guitars and some SERIOUSLY groovy organs.
"Deep and funky heads-down house music" is how the hype sheet describes the EP and yeah, that pretty much covers it.
Out: This week
About: For all things Lost My Dog-related hit up their website, Facebook or Soundcloud page.
Meantime, here nicked from the latter is a Shades Of Gray podcast for you as well…
Posted by Russell at 21:45