ALBUM VVV - Across The Sea 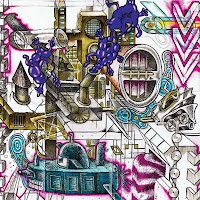 Bit late on this one, admittedly… but a) I did promise I'd post a review and b) it's too good to ignore.

It's being billed as 'future garage'… so, about that. It's a term I struggle with a bit, even though I've used it myself on occasion, cos much of what I've heard touted as 'future garage' tends to fall into one of two camps. To me it either sounds like 1. UK garage, basically, with nothing particularly 'future' about it however good it may be. Or 2. Strange downtempo, dubby EDM bizniss that might be futuristic, I might even like it, but it doesn't particularly have a lot to do with any form of 'garage' that I know. So I can't find much higher praise for Across The Sea than to say that this genuinely does sound like a fresh, modern take on the UKG blueprint – and for that VVV are to be applauded.

This has already been in Mixmag as 'dubstep album of the month' so a lot of you are probably very aware of it anyway, and as such I won't bang on too much. But cast your mind back to the late 90s/early 00s… there were hints – and by hints, I mostly mean Donna Dee's Spellbound, for my money one of dance music's most under-rated long players of all time – that UKG had the potential to mature into a music that was as suitable for home listening as it was for the dancefloor. Then the whole 'crews' thing happened and the whole scene descended into a fiasco of 'attitude', braggadocio and gunplay. Which was a shame.
Well, with Across The Sea, it's like that potential has at long, long last been realised. Moving seamlessly from heavy bass epics like Stuck Between, Under Control and Retreated, to the twitchy, glitchy two-step of All That We've Been Through or Across The Sea, from energetic hip-shaker Aisle Sea to the dusty, melancholic loops of Someday and Thick, this is an album that needs to be heard in full, several times, before it really starts to sink in.
But when it does, you'll be hooked. VVV good stuff indeed.
Out: Now… I'm not sure how long for, cos the website says December but I was told 23 March?! Anyway, see above.
About: This comes on Scottish label Fortified Audio, here's the usual links: website Facebook Soundcloud.
Oh yeah, and VVV are from Austin, Texas… which isn't as surprising as you might think given that, as I recall, Texas and Poland used to be about the only two places UKG ever made much impression outside the UK. Funny how these things work, innit?
Posted by Russell at 19:54