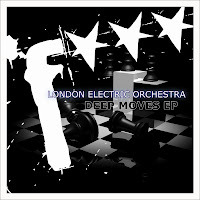 The headline event has to be If Ever You're Lonely, a remake of the 2002 Joi Cardwell cut featuring none other than Ms Cardwell herself. Something of a coup for the label, and if you're in search of traditional vocal house vibes, you won't find much better this month. Stuck, by way of contrast, is a much, much deeper, warm-up/post-club kinda thang, with two minutes of beatless, atmospheric intro, shimmering pads that go on forever and barely-there snatches of spoken female vocal.

But the standout for me is Want What, a garage-y Rhodes groove with chopped vocal stabs and some subtly-applied sax appeal… sterling stuff.

About: Just to confuse matters, Robin is also Rob Made of Sleazy Deep fame… and a 32yo plumber from Ipswich called Dave, and a teenaged girl called Claire. Multiple personality syndrome is a terrible and tragic thing. Anyway, you can find F*** House Music at their website, on Facebook and on Soundcloud.
Posted by Russell at 10:26