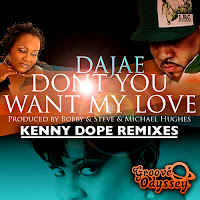 A noteworthy pairing of old-school heroes now, as Kenny Dope serves up three remixes of Dajae's Don't You Want My Love from 2011.

The O'Gutta Remix is a fairly trad vocal affair but with some added techy/acid squelch, and comes accompanied by a mix called O'Gutta TV which is basically an instrumental of the same. S'cool, but top honours for me go to the Kenny Dope Bass Dubb (yeah, two b's), a stripped-down pass with Dajea's unmistakeable tonsils still in full effect but now screamin' out atop a dark room groove made up of hefty, bubblin' bass and those trademark razor-sharp Gonzalez beats.

Respect is due, as they say!

About: This comes atcha on Groove Odyssey, which is of course Bobby & Steve's label… actually strictly speaking it's run by Bobby & Steve with Michael Hughes but anyway, you can find 'em here.
Posted by Russell at 17:53