Miami Ice – The Way You 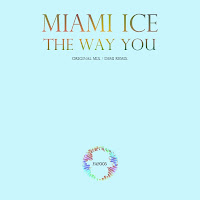 Another simple two-tracker here from Germany's Markus Greulich, AKA Miami Ice, who's previously appeared on the likes of Lost My Dog and Endemic Digital.

The Original of The Way You is fairly heads-down and moody deep/tech chugger, though looping vocals and a killer organ line bring the musicality and save it from being just another set-filler track. File this one somewhere between east London and the east midlands! Over on the B, meanwhile, Demi (of Be Yourself/SOS/Balance fame) serves up a percussion-led remix that takes the track into prog/tech territory.

It's the original all the way for me, though – when you've got a top-drawer organ line like that, why on Earth would you ditch it? It's insanity, that's what it is.

About: This comes on fledgling UK label Form-and Function, who are themselves connected to the Endemic Digital empire and who can be found on Facebook and Soundcloud.

Oh yeah and if you dig this then also check Miami Ice's track Kehta from Endemic's Three Years On compilation… now that really IS a killer organ track!
Posted by Russell at 17:19