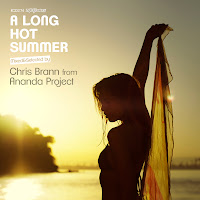 The first of two long-players for you tonight from the legendary King Street stable.

First up, this mix album from Chris Brann. You've got to give Mr Brann one thing: he's no one-trick pony, flipping effortlessly back and and forth between the chilled, soulful grooves of Ananda Project, and his more experimental, forward-thinking work when wearing his P'taah hat (see last year's excellent Perfumed Silence album: it somewhat unjustly didn't get reviewed on here cos I was on holiday the week it came out, but if you've not heard the album then trust me, it's a cracker). To name but two of his various guises.

Here, though, he's billed as 'Chris Brann from Ananda Project', which gives you an idea of what to expect: laidback, sultry house grooves tailormade for lazing on beaches. It's a little polite in its earlier stretches, perhaps, but the energy levels do start to pick up as the mix progresses… just like you'd want them to if you were sat on an Ibizan terrace watching the sun go down.

With tracks and mixes from the likes of Groove Assassin, Frankie Feliciano, Jay-J, Sunshine 'Dubtribe' Jones, Tiger Stripes and Kiko Navarro, this has summer written all over it – quite literally. Mojitos, anyone?

About: You must know where to find King Street Sounds by now, surely? This particular comp comes under the Nite Grooves banner.
Posted by Russell at 22:14