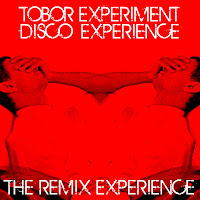 Something of a mixed bag for me, this remix package from TEDE… but the good bits outweigh the bad bits so it's well worth a mention.

Lady [Extended Remix] starts out brilliantly, with a big, dramatic sci-fi intro that… well, it's not as good as Heatwave's Therm Warfare but it's better than The Real Thing's Can You Feel The Force?, and as big dramatic disco intros go that makes it Pretty Damn Good. Sadly, once the singing starts we drift into Let's Dance-era Bowie, which isn't so good. Label boss Steve Kotey's rub of Shivers is a decent slab of retro, analogue Italo action, though again the vocal spoils things a bit.

But none of that matters too much, because the standout here by far is the Fabrizio Mammarella Remix of Disco Moog. Now I'll admit, I'm pretty much forced to love any record called Disco Moog anyway, almost as a matter of principle… but this party-starting nu-disco stomper with its handclaps, vocodered "dance with me" vox, Negro-esque space-disco synth stabs and, of course, tons of Moog, does actually live up to its name. Admirably.

Keep your feet still while the latter track's playing, and you are officially dead. You are not resting… you are not pining for the discos… you are an ex-groover, and you have ceased to be.

About: This comes from those UK disco stalwarts over at Bear Funk. As well as the website you can find 'em on Facebook and Soundcloud.
Posted by Russell at 14:58