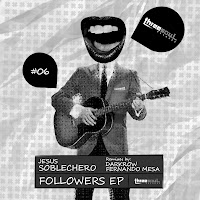 And from one Jesus to another! But while Jesus Pablo is an old friend of this blog and hails from Liverpool, Jesus Soblechero is a new name to me, about whom all I can tell you is that he's described on the hype sheet as a "Spanish funk master". Which has to be the coolest job description I've read all week.

There are four tracks on the EP in total: three mixes of the title track plus bonus cut Sangha. In its Original form, Followers itself is a tuff-ish deep/tech houser based around rattling snares/hi-hats, weird chopped-up vocal snips and an equally weird (possibly reversed?) pulsing synth line. A remix from Darkrow ups the tempo, largely drops the synth and makes a little more of vocal, while the Fernando Mesa rub is similar but more energetic again, veering towards Great Stuff-esque tech-house. And then finally Sangha is another percussion-led deep/tech affair, but with a slightly more organic, soulful feel.

All told, these are stripped-down, jackin' cuts made for moving underground 4am dancefloors. And we like that sort of thing round here, don't we?

About: This comes on Soblechero's own ThreeSoul Records, who (obviously) are also new to me. But thanks to the power of Google, here's their MySpace, Facebook and Soundcloud.
Posted by Russell at 16:48