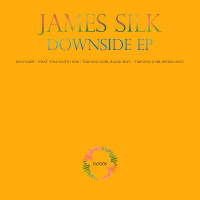 It's a four-track affair. The title cut is a big, throbbing slab of contemporary-style deepness that does strange, twisted things with the vocal from Diana's disco anthem Upside Down…  I don't THINK it''s actually a sample, but it's been so sonically messed-with it's kinda hard to tell! Part of me wants to scream 'sacrilege' but a) it works, b) the track's definitely an entity in its own right, rather than a shoddy rip-off of Ms Ross's classic and c) not everyone is an old fart like me and 90% of clubbers that hear it won't care, or possibly even realise!

So it's getting the TIWWD thumbs-up after all. Elsewhere, Turning Over reworks Clarity's 1985 boogie/R&B nugget The Way U Make Me Feel and gives it something of a late 90s disco-house-in-Ibiza twist, coming compete with a (TBH not vastly different) Eivissa Edit just to hammer the point home, while What You Waitin' For doesn't, as you might be expecting, take a bite from the Jungle Bros but instead is another throbby, now-sounding deep dancefloor cut, with a looping "if you want it you can have it, come get it" vocal, the overall effect being not dissimilar to being transported back to The Tunnel in ’95 with Vasquez working his big dark room magic.

Another sterling effort from Mr Silk then, once more demonstrating the young producer's remarkable knowledge of his musical heritage.

About: This comes from Form-and Function, which is co-run by Endemic's Wez Saunders but seems to exist as a more separate entity… here's where to find 'em on Soundcloud and Facebook.

PS: Just kinda catching up with this week's tuneage so that's probably your lot for tonight, unless of course anything absolutely blows my socks off :-)
Posted by Russell at 22:14