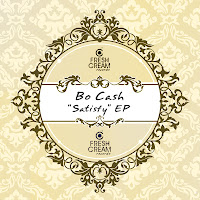 A two-tracker here from a relatively new arrival on the scene, Hungarian producer Bo-Cash. I say 'relatively new' cos he has had stuff out before apparently, but this is the first time I've come across the lad – or indeed the label, Fresh Cream Records.

As for the two tracks, then… Hot Shot sits somewhere between house and nu-disco: there's a bit of a synth-pop/indie-dance kinda influence too, but not horribly so. Personally though I'm preferring Satisfy itself, a more atmospheric affair with a darkly rumbling b-line and a “satisfy!” vocal sample that reminds me a little bit of Kate Bush, for some reason.

Not a world-beater this one, perhaps, but it's decent stuff and it's always good to hear from someone new in the game.

About: You can find Fresh Cream at their website, or Bo-Cash himself on Soundcloud.
Posted by Russell at 20:22