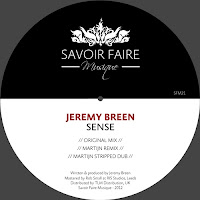 The original version from Breen (who you may remember from his previous Holic Down, also on SFM) is a midpaced, blissed-out groover based around sumptuous piano chords, chicka-chicking hi-hats and synths that I'd want to describe as soaring and euphoric, only that makes them sound horrible and cheesy, which they're not.

Said original is accompanied by a brace of rerubs from none other than Martijn, of Deep Edition fame. His Remix takes the track into more floor-centric deep house territory, dominated by an organ line straight outta the mid-90s and additional chopped-up, chant-style vox, while his Stripped Dub is… well, more of the same basically.

About: You can find Savoir Faire Musique at their website, on Facebook and on Soundcloud.
Posted by Russell at 20:42