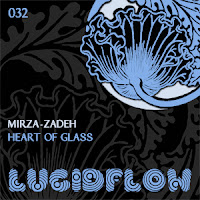 It's been a long day and I'm about ready to crash and burn (not necessarily in that order!) but before I do, there's this… which is, it has to be said, a very enjoyable way to end the day.

Five tracks, coming (mostly) from that most rewarding of musical places where deep house and deep techno collide. Bar-B-Q ain't nothin' but a lazy, sumptous, bassy late-night groove; Bernado's Sarangi is as fine a piece of sitar-sporting downtempo Indian fusion bizniss as you'll hear all summer;  Reflection is more out-and-out deep techno cut, one of those atmospheric, cinematic numbers that sounds like it's been recorded in a huge underground cavern full of leaking pipes; Tachyon takes that same blueprint, but then overlays it with disco synths to quite devastating effect; and finally Heart Of Glass itself is another slower, more sofa-oriented affair, with whispered vocals, tinkling chimes and abstract synth squiggles among the elements that drift tantalisingly in and out of the mix as the track ambles along to its conclusion 6 and a half very chilled-out minutes later.

Superb stuff for those that like it so laidback it's horizontal!

About: This comes on Lucidflow, also home to Klartraum… more info at their website, Facebook and Soundcloud pages
Posted by Russell at 22:47