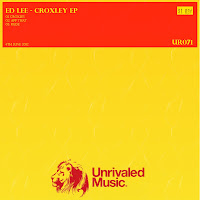 Don't think Endemic stalwart Ed Lee has cropped up on here for a little while, so as we come to start this week's reviews let's give the lad first dibs!

The Croxley EP is made up of three original tracks. Croxley itself is an upbeat and tuff-ish tech-houser featuring some odd whistling noises and a long breakdown in the middle… one for mangling heads at afterparties. App That operates in slightly more traditionally 'house-y' territory and is a rolling, bass-y groover with vocal snips buried so deep in the mix you hardly notice they're there, while finally Rude takes us on a trip all the way back to 1997, when sugar was sweeter, bad boys moved in silence, republics were baffled and gunmen were locked down… retro speed garage frolics ahoy!

Rude is the star of the show for me, but the other two will keep 'em moving nicely for sure.


About: As I said, Mr Lee is something of a regular round the Endemic Digital camp… this particular release comes from the Unrivaled Music branch of the Essex empire
Posted by Russell at 19:37