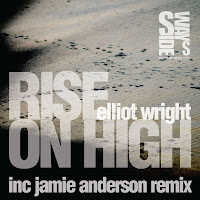 In its original form, Rise On High is a soulfully-inclined groover, sporting garage-y organ stabs, snippets of spoken vocal and some nice acid-y stabs that give the track that little bit of extra bite. It's good, but the B-side is even better, as in Jamie Anderson's hands the acid touches are brought to the fore in a techier rub, with a big squelchy 303 bassline added just to ram the point home.

It's the latter mix with its perfect blend of darker and lighter elements that's doing it best for me, but the A-side will also have its fans for sure… making for a strong release all-round from this rising UK house imprint.

About: You can find Sideways Recordings, who are based in Folkestone, at their website or on Soundcloud. Here's Elliott's own Soundcloud page as well.
Posted by Russell at 17:06