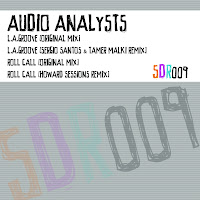 A new EP here from the ever-checkable Something Different that sees the label going down a slightly more techy route than on previous outings.

LA Groove itself starts out with slightly swung and tribal-leaning beats topped off with understated psychedelic geetars buried low in the mix, then gradually introduces organ stabs and strings before finally allowing the six-string to emerge into the sunlight… "in sunlight" (perhaps on a certain Mediterranan island) being where this track would be most at home. The accompanying remix from Sergio Santos & Tamer Malki goes down a very different road, as they transform the track into a lugubrious techy chugger made for afterhours play.

On the flip, Roll Call is in its original form another tribal-influenced number that harks back to the early progressive era (think Spooky, Drum Club etc) with its chanted vox and big squelchy synth-bass, before the pick of the EP (for me) arrives in the form of Howard Sessions' ominously brooding deep/tech house rework.

Something different from Something Different, then, but solid stuff as ever.

About: You can keep up with Something Different's goings-on at their Soundcloud and Facebook pages.
Posted by Russell at 20:16