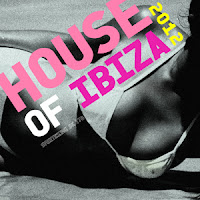 Okay, so I'm just a little bit confused, cos didn't we look at an EP of this name from Street King just recently? And none of the tracks seem to be the same so it's not like that was a sampler. But anyway, yes, here's the second of tonight's King Street long-players.

Again it's a V/A compilation and again it's very Ibiza-oriented; yet it's also a very different beast from the Chris Brann mix below. It's unmixed, for one thing. For another, where that album's packed with big names from the more traditional US house scene, on this one we're treated to upfront and unreleased nuggets from today's house heroes and rising stars, with Tom De Neef, Spettro, Filtertypen, Scott Wozniak and Satoshi Fumi being some of the names that you'll probably recognise.

With tracks ranging from terrace-friendly percussion workouts like Pacha DJ's Danza Loca, to throbbing strobe-lit 5am chuggers like T Ruggieri's Destroy, from the deep grooves of Benjamin Shock's Five Smooth Stones to the unashamed hi-octane party vibes of Yakka's See The Light (which samples Grease and actually carries it off*), if the Brann mix is Ibiza 2012 by day, this is Ibiza 2012 by night. And it's sounding pretty good… with Ben Royal's Let's Go, Spettro's I Felt Raised and, yes, the Yakka track among the highlights for me.

About: Same link, but this one is flying the Street King flag. As I believe I said at the start. Oh yeah, and this one's SK178 by the way; the five-track EP before was SK179. In case that assists in your no-doubt-imminent purchasing activities.

*Quentin Kane's M.U.S.I.C pulls off a similarly unlikely sampling coup, utilising the very familiar riff from a certain well-known disco-era cut by the misunderstood genius that is Rod The Mod.
Posted by Russell at 22:31