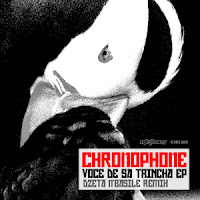 Veteran US house label King Street is definitely on something of a roll right now. I had a big batch of promos through from them the other day and almost every release coming up over the next couple of months is a killer, trust. Don't know what they're doing but let's hope they keep doing it…

In the meantime, there's this, a five-track EP from French producer Chronopone, AKA Stephan Joulin, that serves up various different flavours of deep house. Por La Vida is a languid, laidback affair, all lingering pads and muted trumpets,  while Mellow Cotton is a sparse, techy number with proggy overtones. Both are good at what they do, but the standout by far here is the title track.

NowI don't know what the original of Voce De Sa Trincha sounds like – nor the fifth track Gold, for that matter, cos they've not included those on the promo mailout. But for once I'm not screwing, cos what they did send is the DZeta & Basile Remix. And THAT is as officially crucial a slab of heavily dub-inflected deepness as June is likely to deliver.

After that, Gold could be a Eurotrance cover of the Spandau Ballet song with a rap by Dappy, for all I care – you'd still need this anyway.

About: Here's that familiar King Street link again! So, just for variety's sake, here's the Dzeta & Basile Facebook page as well. Haven't heard from these boys in a while – they used to feature on TIWWD quite a lot when it started and I put them in iDJ's rising stars of deep house thing last year, then it's been a bit quiet since – but great to have them back.

PS That's it for tonight… been a long day and I'm tired. Plus after getting lost in the sparse, bass-y beauty of the DZeta & Basile offering, nothing else would sound as good right now anyway...
Posted by Russell at 22:37