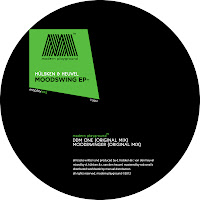 Moodswinger is the housier of the two tracks and my fave, a chugging number with sharp, crisp beats, nagging synth stabs and an insistent one-note organ drone throughout… a jackin' cut for those small-hours moments when your floor is properly in the zone. B-side DDM One is a slightly techier affair, with driving 4/4 kicks and claps providing the rhythmic atop which ride all manner of moody synth squiggles that are eventually joined by some jaunty pianos.

Apparently Hülskel & Heuvel function primarily as a live act; on this evidence, theirs should be a show that's worth looking out for.

About: Modern Playground are based in Amsterdam and have been going since 2009, I'm told, though this is the first time I've come across 'em personally… find out more at their website, on Facebook or on Soundcloud.
Posted by Russell at 15:45