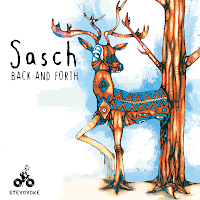 Fledgling Berlin label Steyoyoke serve up more quality deepness here, this time from a producer whose past credits include releases on the uber-hip Neurotraxx Deluxe, among others.

I Just Want is a cool, unhurried deep houser with just the merest hints of disco around the edges. The disco factor gets upped considerably on Come On, which is positively Stardust-esque, yet somehow still manages to maintain that Berlin sang-froid. And then finally there's Marian – not the cover I was half-expecting after DK Watts' little bit of Sisters-biting last week, but rather a deep n' dreamy groover with a light touch of the Balearic about it, built for sun-ups and sun-downs.

Four releases in and every one a winner so far – Steyoyoke is definitely a label to be keeping an eye on.

About: You can find Steyoyoke at their website, on Facebook and on Soundcloud. Tell 'em TIWWD sent you.
Posted by Russell at 12:42