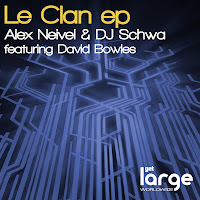 Better known as Shades Of Gray, here this Czech duo make an appearance on Chicago's legendary Large Music with a three-track EP under their own names.

Anything You Like gets the ball rolling, an unhurried, chuggy deep house groover with some great fat squelchy-bordering-on-acid bass and a slightly trippy feel overall. Le Clan features slightly tuffer beats but they contrast nicely with a jaunty, jazzy feel as the track progresses, complete with ever-so-Francais spoken vocal samples. The standout of the EP for me though is Perculator [sic], as the Prague boys team up with vocalist David Bowles for a very respectable (albeit misspelled) cover of the Cajmere classic that's somewhat deeper and groovier than the original, but works very well indeed.

But don't take my word for it: Czech it out for yourselves!

About: Large Music live here, and you can also find them here (Soundcloud) and here (Facebook).

PS: I'm sorry about the crap 'Czech' joke, I can't help myself sometimes. Just think what my poor girlfriend has to put up with!

PPS: And if it's any consolation, at least it was slightly less tenuous than the 'bouncing Czechs' one I had in mind…
Posted by Russell at 20:30