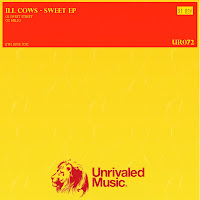 Who said all the good band/artist names had gone, eh? Ill Cows indeed… I'm actually not sure whether that's the most rubbish name I've heard all year, or the best. But I'm erring towards the best.

Anyway it's not who they're by, it's what they sound like that matters, and this two-tracker from Unrivaled sounds pretty good, truth be told. On the A, Sweet Street kicks off with some fairly harsh percussion that sounds like we're gonna be in boys' own tech-house territory, but then surprises by dropping down instead into a stripped, raw house groove reminiscent of vintage Serious Grooves tackle. Over on the B, meanwhile, Hello is a fairly par-for-the-course techy chugger but distinguishes itself with a quirky, French-accented spoken vocal – saying "hello", obviously.

About: Every week I tell you how Unrivaled is part of the Endemic Digital stable. Soon I won't have to, though, cos TIWWD is having a makeover – stay tuned for more details…
Posted by Russell at 21:45