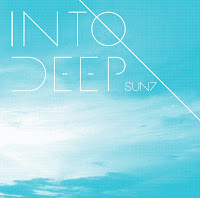 I was gonna try and catch up on the week's single releases tonight but now we're in an albums groove we might as well stay there… especially as this is, I have to say, one of the most pleasant 'unexpected treats' I've had through in a while. 'Unexpected' because Sun 7 is an artist I've not come across before; likewise I wasn't until now familiar with Raygun Records, either. So when I first stuck this on I didn't know what to expect at all.

Suffice to say that first time I stuck this album on turned out to be the first of many! "A variety of house styles, ranging between chilly, soulful deepness and proper danceability" is how the hype sheet describes Into Deep*, and that's a pretty fair description. Opening with the off-kilter, jazzual nu-disco grooves of House Me (Apollo 11) working its way over the course of the ensuing 11 tracks through deep, techy, soulful flavas before ending with the appropriate-titled Closer featuring sometimes Manuel Tur and Pezzner vocalist Larissa Kapp, this is as fine a full-album house music listening experience as you're likely to find this month.

So go find it.

About: Sun7, I now know, is Barcelona's Armando Mendes, who we're told has roots in jazz-funk and a fondness for classic Chi-town house and Motor City techno. None of which will surprise you've if you'd heard this album. If you want to know more, this link to the Raygun Records back cat on Beatport is the best I can do right now.

* So all right, I had some idea what to expect, but you know what I mean…
Posted by Russell at 23:36