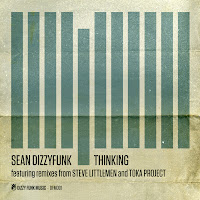 There's an impressive remix line-up too, for such a new label. Sean's original of Thinking is a disco/garage-tinged deep house dancefloor cut with a vocal that's somewhat reminiscent of the mighty Janet circa Control. So Excited's vocal mix busies up the percussion and brings the squelchy synths to the fore, Steve Littlemen's remix strips the track back a little and is a more bumpin' affair, while Toka Project's Remix harks back to the rave era with insistent synth strings and hip-house vox.

Toka Project and the Original vie for top honours for me, but this is a fine debut release all round. More soon, please.

About: Dizzy Funk Music has been born out of the Dizzy Funk Soundsystem. Based out of Peterborough's Groove Records store, the Dizzy Funk crew have been active on the Midlands free party scene for over a decade… hence being able to attract such a heavyweight line-up of UK deep house talent to help 'em pop their release cherry. Find 'em on Facebook and Soundcloud or at their own website… and check the TIWWD Facebook page for some Dizzy Funk-related shenanigans starring the legendary Digs & Woosh.
Posted by Russell at 15:09