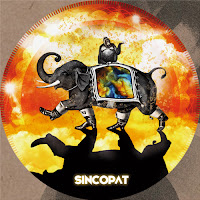 Three tracks in total of five mixes on this latest from Spanish label Sincopat.

Promolone itself is a chunky deep/tech houser with a dark edge and hints of prog in the arpeggiated synths, though don't let that put you off if you're prog-phobic cos once you hear this it's gonna be the rumbling b-line that most sticks in your head, trust! Dapayk then remixes the track into a more uptempo and more overtly techno cut.

Elsewhere, Amicdhala (featuring label boss AFFKT) in its original form is another deep, dark groover with a spoken "1, 2, 3, 4… motherfuckers" vocal and weirdy synth wibbles, while Piek does the opposite from Dapayk on his remix and takes us into housier territory, albeit rest assured this is house of the late-night connoisseur's rather than the peaktime idiot-friendly variety. And then finally Monoclany rounds out the EP, a slab of dirty Detroitian electronic funk with a hip-house vocal asking "Where my dogz at yo?"

All told, a varied and original release from a label who are just eight releases old, and who you should probably be keeping an eye on.

About: You can keep said eye on said label by visiting their website, Facebook and Soundcloud pages.

PS: What you do with the other eye is up to you. Perhaps you could visit the kingdom of the blind and be their king?
Posted by Russell at 20:01