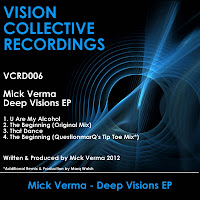 With an EP title like Deep Visions, you probably already have a good idea of what you're getting here…

Up first is The Beginning, presented in two mixes: the Original, plus QuestionmarQ's Tip Toe Remix. Driving me a little bit mad, this one, cos I know I've heard the "in the beginning, before there was house, before there was techno, before there was acid, before all that… there was disco" vocal before, but I can't remember where, or whether it was on previously released mixes of this track or on something else entirely! Either way, in this instance said vocal is chopped up to within an inch of its life, so that it's mostly just stabs saying "house!" or "acid!" or whatever, with the Original a dreamy deep houser and QuestionmarQ's rub taking us even further into the driftaway zone with its one-bar piano loop and shufflin' snares.

Elsewhere on the EP, That Dance is a downtempo groove riding a lazy, lo-fi breakbeat, topped with orchestral string rises straight outta Unfinished Sympathy (though not ACTUALLY straight outta Unfinished Sympathy, you understand) and gently tinkling ivories, while You Are My Alcohol is a languid, soulfully-tinged shuffler that you can see sounding just freakin' PERFECT at an Ibiza beach bar as the sun sets.

All told, then, another quality offering from Vision Collective.

About: Vision Collective hail from Cork, Ireland and can be found at their website, on Soundcloud and on Facebook.