Mr Pedros – It Came From Us 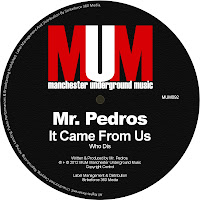 In which the Sankeys resident serves up a tuff-ish, driving house cut that you won't forget once you hear it: it's the one with the extensive samples from Blow. As in the Johnny Depp/Ray Liotta film about cocaine smuggling. Normally I might cavil at the sample choice… not for moral reasons particularly, just cos drug talk isn't really the most original material to choose, is it? But in this case, it just works, as do the shoulder-shaking, lolloping beats and insistent bass stabs.

On the flip, Who Dis is another driving houser, again with the almost-tribal beats and dark room feel… in fact we're almost in mid-90s Vasquez/Tenaglia territory. Again, it works, but it can't quite compete with the A-side for me.

You're still gonna need this for the A anyway, though!

About: What with Mr Pedros having a job playing records at the Beehive Mill, it's no surprise that this comes on Manchester Underground Music really, is it?
Posted by Russell at 21:18