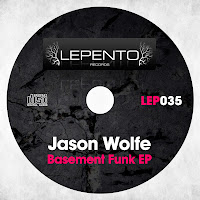 "Big jackin' disco vibes," is how the one-line email that accompanied the latest from the mysterious Lepento Records describes this one. Which kinda works… though "house like the 00s never happened" would do it even better, cos this is an EP that'll have anyone who ever wore a shiny shirt, loafers or those stack-heeled black buckskin boots onto the floor at Vague, Moneypennys, Holy City Zoo or Love To Be grinning in nostalgic delight.

So: retro peaktime screamers ahoy! It's Time is big n' brassy filter disco in the 1995 Hustler's Convention/Kadoc/etc vein, while Move On drops what sounds like a cheeky bite from Once In A Lifetime before moving into a very passable impression of a 90s house remix of First Choice. But the pick for me is Basement Funk itself, a no less big but slightly less brash disco-houser that makes sterling use of the B Beat Girls "all right" vocal sample made famous by Size 9's I'm Ready, among others.

Warning: Playing the Outcross record below will make you look dead cool n' hip n' that. Playing this record won't. But it will make people dance, and speaking as a veteran of the handbag and nu-NRG era myself, I rather like it. So there.

About: You can find Lepento via Soundcloud.
Posted by Russell at 21:25