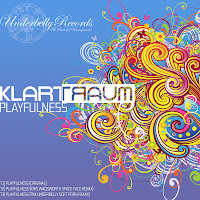 I've gotta say the Klartraum/Lucidflow school of deep, dubby, thinking man's techno has really been hitting the spot for me lately… so here's some more of it.

But while both of those are very cool, the pick for me here is still the Original, a glitchy, twitchy affair that's as close as deep techno ever gets to two-step garage. FFWD veterans, minimal/micro-house devotees and red-eyed dawn tokers generally should enjoy this one a lot.

Out: This week, digitally (it's been kicking around on vinyl for a couple of weeks but it only landed with me last week)

About: This comes not on Klartraum's Lucidflow, but on Tim's own UK-based Underbelly Records. Here's the obligatory website, Facebook and Soundcloud links, then…
Posted by Russell at 17:06