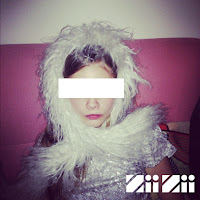 Only the third release here from new UK label ZiiZii Records, and the first to land on the TIWWD doormat.

The EP opens with Release Yourself, er, itself, a nu-boogie/slo-mo house groove. It's got one of those ubiquitous down-pitched vocals intoning "it makes no difference", but is most notable for its FAT bassline. Next up is my personal fave Reflections, a midtempo space-disco workout with some killer pyow! stabs. Need Ya Back is another deep house-meets-nu disco jam with a big diva vocal, while the EP ends with The Dub Rub, which doesn't have much to do with dub in any sense but is a perfectly acceptable nu-disco/slo-mo cut that sounds a bit like the Yellow Magic Orchestra playing Morel's Grooves while on downers.

But I wanted to end the review on a high note, so before you get to the latter there's also The Ghostly Track, which is my close-second pick after Reflections and which chugs along at a house-y tempo while making enough use of spooky Theremin-type noises to render the title entirely accurate!

About: You can find ZiiZii Records on Facebook and Soundcloud.
Posted by Russell at 21:19