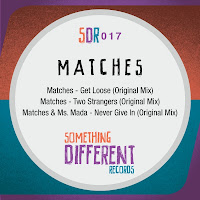 Was just singing Matches' praises on this blog a few days ago… now here he is again, this time with a three-tracker of his own on Jesus Pablo and Di Riviera's Something Different, who recently celebrated their first birthday.

Get Loose itself is a loose-limbed midtempo jam with a vaguely garage-y feel (by which I basically mean it's got a female vocal and some cool organ sounds). Never Give In is an ever-so-slightly more insistent, uptempo number with a killer acid-y bassline, while finally Two Strangers ain't nothing but a locked-on 5am afterhours groove, all rock-solid looped drums, freaky spoken male vocals and dub-wise flourishes.

Like I said a few days ago, Matches really isn't putting a foot wrong for me at the minute.

About: You can find Something Different on Soundcloud and Facebook.
Posted by Russell at 14:29