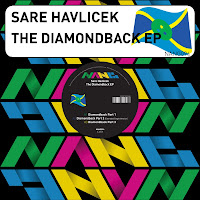 Seems like ages since we heard from Sare, one of TIWWD's favourite purveyors of nu-disco grooves… but now here he comes again with a second single lifted from his sophomore album Escape Machine, which came out back in what we laughingly referred to as "the summer".

Diamondback Parts 1 and 2, from said album, are now cojoined as the lead single track here, and have lost none of their sophisticated, string-drenched appeal. "Big, Balearic, lavish, majestic… evening dress optional" is how my notes read for this one! Part 3 ups the tempo a notch and adds some Prince-ish geetars, while Part 4 edges even closer to a house tempo and rides a chunky walking bassline.

Gotta say I'm less into the down-pitched male vox on Part 5, while as for Pure Sin (Diamondback Part 6), which drops back down in tempo again and features a vocal from Lara Love… well, Mrs TIWWD heard it and said, "Are you listening to Kylie?" which tells you about all you need to know.

But no matter, cos Diamondback Parts 1 & 2 is just awesome – disco goodness for grown-ups – while Parts 3 and 4 will serve you well for taking the track to housier situations.

About: This comes as ever on the mighty Nang Records. Oh, and you can HEAR IT at Sare's own Soundcloud page.
Posted by Russell at 21:01