Giorgio Moroder – From Here To Eternity 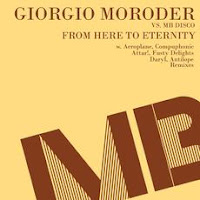 In which Europe's original disco don gets the remix treatment from a clutch of today's young whippersnappers.

Aeroplane, Antilope, Fusty Delights, Attari, Compuphonic and Daryl are the whippersnappers in question, and while I'm not going into each and every mix individually, suffice to say lovers of nu-disco will be more than satisfied with most of 'em, while the Fusty Delights rub edges towards deep house and Compuphonic's slower, dreamier version could appeal to a wider audience as well. I'm thinking listeners to Rob Da Bank's shows and such.

Oh yeah, and the original came out on Casablanca Records in 1977, BTW, and all the remixers are Belgian. For all you fact-lovers out there!

About: This comes on Martin Brodin's MB Disco label, who can be found hanging around the internet looking shifty (and Swedish) in such places as Facecloud and Soundbook.
Posted by Russell at 20:26