Max One - Program The Jam 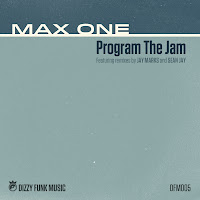 After something of a retro-fest yesterday, here we continue in a similar vein with another release that looks to the recent past for inspiration.

Rather than UK garage of the mid-late 90s though, it's the deep and soulful house sound of late 90s/early 00s San Francisco that's the most obvious influence on this latest from Midlands-based deep house label Dizzy Funk. With a hip-house vocal that couldn't sound more Tyree Cooper-esque if it tried, female backing vocal wails and a fat n' funky b-line, the Original here would've sounded right at home in the early days of Salted, Loveslap!, Transport or Naked.

About: You can find Dizzy Funk on Soundcloud and Facebook.
Posted by Russell at 17:58