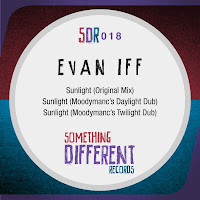 It's been bugging me all week what this latest from Something Different reminded me of and I've just realised… if anyone remembers Take Arms by Shimmer from back in about, ooh, 1993? (and not 2003 as, er, some elves sneaked on here and wrote before) then this is in quite a similar vein. But you probably don't. I think I was about the one person in the whole of England that played it at the time.

So that's not much use as a review, and instead I'll explain that in its original form, Sunlight is an organ-sporting and rather sprightly deep/tech throbber with a yearnsome near-falsetto male vocal intoning "I will be the sunlight in your universe". Which seems a tad presumptuous of him to me, frankly, but there you go! Great tune though.

About: Find Something Different where you find everyone else… Soundcloud and Facebook. Durr.
Posted by Russell at 18:10