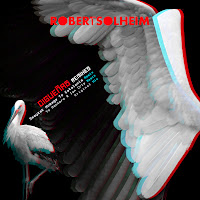 I don't think anything from Aquavit BEAT has featured on here before… I did get sent the album this is taken from back in June but I have to admit it appears to have got a little overlooked. I'll be going back to check it again now though, because the original version of Cigueñas, which features here, is great – a dreamy, late-night meander that blends deep house, prog and techy elements superbly.

It's accompanied on this single release by two rerubs. Yo Montero & Ian Cris's is minimal and trippy with an insistent bass squelch for much of its duration, while Swayzak's Homage To Catalonia Remix is an 11-minute trek into deep techno pastures.

The original just pips it for me, but there's plenty for deeper heads to enjoy here whichever mix you plump for.

About: Aquavit BEAT are a Norwegian label… here's their website, Facebook and Soundcloud if you wanna know more
Posted by Russell at 20:58