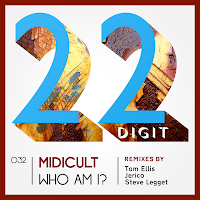 "Ten minutes of hypnotic tech house" is how the hype sheet describes this one. And yeah, that's about the size of it.

If I just left it at that though you'd probably be a mite disgruntled. So in more detail… nah, "ten minutes of hypnotic tech-house" pretty much nails it for the original! I might add though that we're talking tech-house in the 'deep and groovy', as opposed to the 'fierce and jacking' or 'minimal and a bit scary' sense. Remix-wise Tom Ellis's rub is a little more house-ified and rolling, Jerico ups the BPM slightly and throws in some vintage house/rave synth sounds, while Steve Leggett flips the script entirely and takes us into more leftfield, downtempo territory.

The latter's actually the rub I'd be least likely to play but Mr Leggett should at least be applauded for his more imaginative/inventive approach. As for the other three… crucial stuff all round but if pushed I think Tom Ellis takes the gold for me, with the Original mere microns behind.

About: This comes to you courtesy of 22 Digit Records, who live in Newcastle and also on Facebook and Soundcloud.
Posted by Russell at 19:44