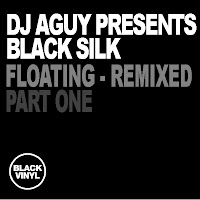 Unsurprisingly, given the title (and to some extent the label, though it's fair to say that Black Vinyl has explored a wider range of house textures of late), we head off on a more musical, soulful tip here.

This mellow cut from DJ Aguy with its Afro-inspired rhythms, lilting Spanish guitars and wistful female vocal first came out in 2003, and now it's back with new mixes from Aguy himself (under his Black Silk guise) and Italy's Mauritzio Baiocchi. The Black Silk Dub Guitar 2012 Remix shouldn't take much explaining, the Black Silk Orchestral Remix uses some cool Detroitian string stabs while Mauritzio's Under The Moonlight Remix is all about the rolling percussion, meaning this should serve the more soulfully-inclined jocks well in a range of situations.

Out: This week (everywhere, though it's been available on Traxsource 'exclusive promo' for a couple of weeks I believe)

About: You can find Black Vinyl on Facebook mostly, these days. And in Antigua, where Alan, unlike yours truly, probably isn't having to walk around today in a chunky sweater and thick puffa jacket, the jammy git.
Posted by Russell at 14:07