Carlo Gambino – Low For Me EP 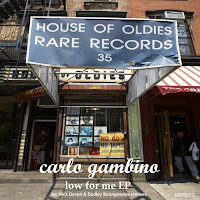 If the two releases on Spring Tube and MUM below are a little too retrofied for your tastes, then this slightly more contemporary-sounding four-tracker from Carlo Gambino on his own Midnight Social Recordings may suit you better.

I say 'four-tracker' but to be more precise there are two tracks in four mixes. Low For Me in its Original form is a chunky, midtempo deep house groove with a slight techy edge and, as is so popular right now, snippets of soulful male vocal, as well as a female spoken vocal that intones the title throughout. A remix from Dudley Strangeways then takes the track to a more head-warped, 4am kinda place altogether.

Say What?, meanwhile, is an even more languid affair in its Original form, sporting piercing high-end synth drones and a big, chunky bassline, while again, the Nick Devon Remix is a trippy, head-noddin' pass aimed straight at the afterhours floors. Both rubs also use a heavily-treated vocal sample from a very well-known R&B track… I won't spoil it by saying what track but the artist rhymes with 'Ronell Rones'!

About: You can find Midnight Social Recordings on Facebook.
Posted by Russell at 17:44