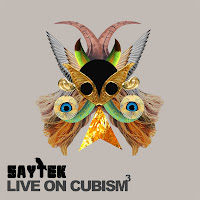 This, you see, is a proper honest-to-goodness live album: just one live set by Joseph 'Saytek' Keevil and his banks of hardware, captured in its entirety. It's not the first time an electronic artist has gone down this route – The Orb's Live 93 and Squarepusher's Solo Electric Bass spring to mind, and I'm sure there are others – but it's still an approach that's unusual enough to be worthy of comment.

As for the music? Well, Saytek has long excelled at blurring the boundaries between house and techno, finding friends in both camps as a result, and this long-player sees him doing what he does best – nuff said! Theoretically there are 20 tracks, but given that they're all jammed live and all flow seamlessly into each other like a DJ set, with some of the sounds and samples making an appearance in more than track, it's really best viewed as one continuous piece of music.

And a rather fine one, at that, that takes in vintage Chi-town house, high-precision techno beats and, ooh, all sorts of jackin' goodness. Seek, and ye shall be impressed. Here endeth the review.

About: This comes of course on Cubism, the label co-managed by Mark Gwinnett and Saytek himself. Their crack team of Album Title Thinker-Uppers probably won't win any awards for inspired originality this year, but they can be found on Soundcloud or at their own website all the same.
Posted by Russell at 19:58