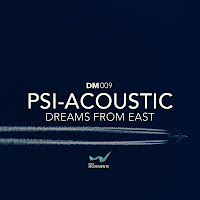 Okay, listen up… after tomorrow, TIWWD will be leaving you for a week or so. Just a week or so, though, so don't get scared. BUT, I've got about 37 million things to do before then, and it's been a crazy week for releases as well* so by no means everything I wanted to get reviewed this week is going to. You have been warned.

This one, though, I had to tell you about. Coming on French label Deep Movements, it's a quite superb five-track EP that sits somewhere between deep house, deep/dub techno, scratchy lo-fi Ninja-esque funk-hop, ambient/uneasy listening and, well, you decide. Dreams From East Pt 2 is fairly easily classed as dub techno while Morning At Frankfurt Airport is straight-up ambience, but as for the rest, I'd struggle to know what genre pigeonhole to put it in.

I just know that if you're looking for late-night smoker's grooves, with at times a slightly unsettling edge, you won't find much better right now.

About: I don't think Deep Movements have featured on TIWWD before so, hello French people! You can find out all about 'em on Soundcloud, Facebook or at their own website. Merveilleux.

* Always happens this time of year, with people trying to get stuff out before Xmas
Posted by Russell at 22:59