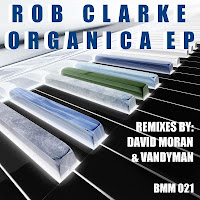 There are no prizes for guessing which instrument features rather heavily on the title track… the organ lovers will be more than happy with this one, while Vandyman's Broken Remix of the same does what it says and takes us toward bruk territory. Elsewhere on the EP, Polar is a tuffer, darker, afterhours kinda groove, X Marks The Spot is big n' bouncy dancefloor deep house, David Moran's remix thereof is a tuffened-up version aimed at big, dark rooms with an added cheeky vocal sample, and finally Menace To Sobriety brings back the organ sounds but adds lots of FX and distortion and repurposes them within a tough tech-house context.

Some cuts here hit the spot more than others for me but that's to be expected – this is the sound of a label/producer experimenting with a variety of sounds and moods, and that's always a good thing. Well no, it's not, actually – see for instance the umpteen French house producers who've insisted on including godawful cod reggae or 'chilled breaks' tracks on their albums.

But it's a good thing here.