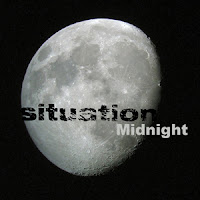 Our fourth and final S is for… Situation, a Welsh collective who've previously appeared on Nang, among others.

There are four mixes of Midnight itself, plus bonus cut Feel Like A Queen. In its Original form, the title track is a sumptuous and garage-y deep house groover featuring a jazz-tinged vocal from one Lauren Rimmell, space-y synths/FX and some light flecks of Spanish guitar. Remix-wise there's an accompanying instrumental, Griffin gives us a more tripped-out pass that flirts with broken beats, while Space Coast (them again! see below) deliver an outstanding Dub for those more jacking, afterhours moments.

Feel Like A Queen, meanwhile, is classic-style jazzy, soulful house that will delight fans of Fred Everything, Ralf Gum, Matty Heilbronn, King Street etc. Oh, and Ms Rimmer doesn't half sound like Latrice Burnett on this one as well. So that's me sold, then.

About: This comes on Dutch label United Recordings, who can also be found on Facebook.
Posted by Russell at 13:19